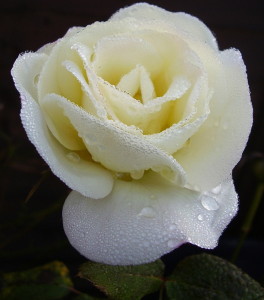 They willfully put God to the test by demanding the food they craved. They spoke against God; they said, “Can God really spread a table in the wilderness?
True, he struck the rock, and water gushed out, streams flowed abundantly,
but can he also give us bread? Can he supply meat for his people?”
When the LORD heard them, he was furious; his fire broke out against Jacob,
and his wrath rose against Israel, for they did not believe in God or trust in his deliverance.
(Psalm 78:18-22 TNIV)

This verse choked me up this morning; it was the proverbial plank between the eyes.  How many times does God need to remind me that He will provide for my every need?  I know I am not the only one; many of us fall into despair or discouragement in the midst of our circumstances.  God desires for us to move beyond that place of falling back into unbelief.

Anne Shirley: Can’t you even imagine you’re in the depths of despair?
Marilla Cuthbert: No I cannot. To despair is to turn your back on God.
(Anne of Green Gables, 1985)

They spoke against God; they said, “Can God really spread a table in the wilderness?
True, he struck the rock, and water gushed out, streams flowed abundantly,
but can he also give us bread? Can he supply meat for his people?” vs 19-20

The Israelites were saying, yeah, God performed miracles for us before; He made water gush from a rock, but can He provide meat?  This was enough to make God furious.  Not only did they question whether God could perform another miracle, but also complained that what He had given them was not good enough.

I must confess that I have been there; I was there today.  I am faced with what would seem insurmountable circumstances; I have some great ideas on how God can help me ~ what I think I need.  How can I dare question Him, when He has done so much for me; He has yet to fail me, why would He start now?  Is anything too hard for the Lord? (Jeremiah 32:27)  If God delivered me from previous troubles, why would He leave me now?  How can I even entertain for a moment that God can’t or won’t help me?  He knows just what I need, which is always better than what I had in mind.

The Israelites unbelief was not unbelief in God’s existence, rather in His ability to provide for and deliver them; though they witnessed His deliverance in parting an ocean to cross on dry land, only for it to crash down on top of their enemies ~ drowning them in the sea.

Do not fear!  Stand by and see the salvation of the LORD which He will accomplish for you today; for the Egyptians whom you have seen today, you will never see them again forever.  The LORD will fight for you while you keep silent.  (Exodus 14:13-14 NASB)

How could God destroy Pharaoh and the Egyptians through such wonders and not able to feed them in the desert?  Water out of a rock – yes; but how can He provide food?  Seems ridiculous, yet how many of us react the same?  He delivers us from one trial, but when the next trial appears, we act as though it will overtake us and that deliverance is impossible.

“Sometimes when we get overwhelmed we forget how big God is.” ~ A.W. Tozer

While it is said, “Today if you hear his voice, do not harden your hearts, as when they provoked me.” For who provoked Him when they had heard? Indeed, did not all those who came out of Egypt led by Moses? And with whom was He angry for forty years? Was it not with those who sinned, whose bodies fell in the wilderness? And to whom did He swear that they would not enter His rest, but to those who were disobedient?
(Hebrews 3:15-18 NASB)

Entering into God’s rest means that we believe what He speaks to us, and we allow Him to fight the battles for us.  He led the Israelites out of Egypt, not to wander in the desert, but to take them into the Promised Land.  He delivered them from Pharaoh, He provided the bread of angels to feed them, yet when circumstances seemed a little too tough, they did not believe He would take care of them.  He desired to be their source; everything they needed ~ He would provide.  Instead of resting in the Almighty powerful God, they complained. The Israelites wandered in the desert for forty years for their murmuring and though He provided for them in the wilderness, despite their complaining, they lived out the remainder of their days and died in the desert.

This event in the wilderness is a very important one.  The Holy Spirit inspired the scribes of the Scriptures to include this account in several places: Psalm 78:18, Psalm 95:8, Hebrews 3:8 and Hebrews 3:15; this, however, is not an exhaustive list.  It was clearly a message the Lord wanted to make sure we heard ~ and take to heart; this message leaps across the pages of the Old Testament to speak again firmly in the New, not because He is mad, but He desires us to be in fellowship with Him.

“It is a call to the Hebrews to come out of that life of unbelief and sloth, that leads to a departing from the living God and to enter into the Promised Land, the rest of God, a life of fellowship and favor. It is a call to all lukewarm, half-hearted Christians, no longer to remain in the outer court of the tabernacle, content with the hope that their sins are pardoned. Nor even to be satisfied with having entered the Holy Place, and there doing the service of the Tabernacle, while the veil still hinders the fellowship with the living God and His love.” (Andrew Murray, Holiest of All).

Come to me, all you who are weary and burdened, and I will give you rest.
(Matthew 11:28 TNIV)

Jesus came to give us rest; when you are weary and overwhelmed, He promises rest when we come to Him.

He again fixes a certain day, ‘Today’ saying through David after so long a time just as has been said before, ‘Today if you hear his voice, do not harden your hearts.  For if Joshua had given them rest, He would not have spoken of another day after that.  So there remains a Sabbath rest for the people of God. (Hebrews 4:7-9 NASB)

God promises repeatedly to be a strong tower, a refuge in the storm; we don’t have to keep going in circles wandering in the wilderness with the Promised Land in sight but beyond our reach.  The Lord created the Sabbath for man; not man for the Sabbath
(see Mark 2:27), so that we can rest, not just on Sunday ~ a day on the calendar; but also spiritually; a day to be still and hear God’s voice and to be filled with the peace of the precious Holy Spirit ~ our Comforter.

“Sabbath is both a day and an attitude to nurture such stillness.  It is both time on a calendar and a disposition of the heart.  It is a day we enter, but just as much a way we see.  Sabbath imparts the rest of God ~ actual physical, mental, spiritual rest, but also the rest of God – the things of God’s nature and presence we miss in our busyness.” (Mark Buchanan, The Rest of God)

From the beginning, God ordained the Sabbath Rest.  He created it for mankind, physically and spiritually.  He ordained a Sabbath rest for the land every seventh year so the land could rest and regain its nutrients; He is the all-wise God and knows His creation in way we never will.  It is for our good to take a physical rest and just as importantly a spiritual rest, resting in God, knowing He will take care of everything.

Circumstances may look overwhelming, storms may come and your boat tossed to and fro.  You will scream out, “Master, don’t you care that we are perishing?!”  He does care, and when we rest in Him, we will not perish; we will find deliverance and rest for our souls.