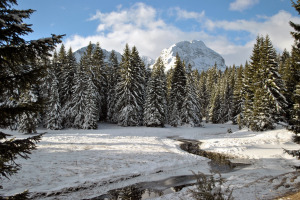 This was the promise for Israel: a new way of life, infused with the presence of their God.

After they disobeyed and ignored Him, after they saw the consequences of their faithlessness in the destruction of their home and the loss of their freedom… because of God’s enduring love, they still had a promise to lift their heads, to give them hope. Isaiah, prophet of old, delivered this promise: Look, your Savior is coming! ~ Isaiah 62:11

God promised redemption and restoration to His people ~ but years upon years passed with only silence between heaven and earth.

How they must have longed for the Messiah to appear in glory and might.  After all they had lost, how they needed the comfort of a Prince of Peace, a Savior to shoulder their burdens and set their people free.

“Now there was a man in Jerusalem called Simeon, who was righteous and devout.  He was waiting for the consolation of Israel, and the Holy Spirit was on him. It had been revealed to him by the Holy Spirit that he would not die before he had seen the Lord’s Messiah.  Moved by the Spirit, he went into the temple courts.  When the parents brought in the child Jesus to do for him what the custom of the Law required, Simeon took him in his arms and praised God…” ~ Luke 2:25-28

There was also a prophet, Anna, the daughter of Penuel, of the tribe of Asher.  She was very old; she had lived with her husband seven years after her marriage, and then was a widow until she was eighty-four.  She never left the temple, but worshiped night and day, fasting and praying. Coming up to them at that very moment, she gave thanks to God and spoke about the child to all who were looking forward to the redemption of Jerusalem.” ~ Luke 2:36-38

Simeon and Anna had been waiting ~ it seems like nearly all their lives ~ to see that promise of old fulfilled.  I have been thinking about these two a lot over the past few days.  Can’t you just see Simeon there, wrinkled and steadfast, waiting day after day to see God’s Word realized?  I like to think that he was quick to tell all of the old stories ~ relishing every miracle, every deliverance, every testament to God’s faithfulness.  I like to think of the spark in his eyes as he stood firm on the foundation of who God had shown Himself to be, the fervor in his voice as he worshiped the One he knew would not fail to fulfill His promise.

Then there’s Anna, a woman who had been widowed for most of her life.  Luke tells us that she never left the temple.  Her love of God was greater than anything else the world could have offered her.  She worshiped, fasted, and prayed day and night.  It seems to me that her whole life was a living sacrifice to the Lord.

The thing that strikes me is this ~ if Simeon had given up his belief in God’s word… if Anna had given up her desire for God’s presence, then their stories would have totally different endings.  Simeon would not have held the Savior of the world in his own arms ~  Anna would not have seen, with her own eyes, the Child who would redeem us all.  What pure joy must have overwhelmed their hearts to witness the ancient words of the prophets fulfilled, the consolation of their people there among them.

Simeon and Anna were ordinary humans, just like us ~ so I have to imagine that there could’ve been days that were harder than others, moments when they wondered if the Messiah would come to save their people.  Maybe they sometimes felt like they were standing alone in their conviction.  Maybe, every now and then, they felt the weariness of waiting.

Yet they never gave up their hope.  They never gave up their expectation that God would do what He said He would do.  So they received the harvest of their faith that God must have been so pleased to give them.
I like to imagine that the Father smiled at Simeon and Anna on that day… I can almost hear Him saying, Well done, my good and faithful servants…enter into the joy of thy Lord.  ~ Matthew 25:23

Jesus says this in the book of Matthew: If you then, being evil, know how to give good gifts to your children, how much more will your Father who is in heaven give good things to those who ask Him! (7:11)  Later in the New Testament, James tells us that “Every good gift and every perfect gift is from above, and comes down from the Father of Lights”. (1:17)  God’s Word is full of promises for His people ~ peace, provision, abundant life, healing for heart, body, and soul.

In one way or another, I believe that we are all waiting on God.  I don’t know what promises you are waiting to see fulfilled in your life.  But I do know that He is true to His Word ~ the end of that verse from James 1:17 assures us that there is no shadow of turning with Him, no variation.  He is the same yesterday, today, and forever.  ~ Hebrews 13:8

Maybe we can relate to Simeon and Anna in this way: just as they waited for the coming of their Messiah, so we wait for His return to earth.  He came the first time and, by the shedding of His own blood, made a new covenant of grace and love between God and any who will believe in Him.  He will come again and make all things new… and there will be no more sorrow, no more sin, no more death.

Here’s what Simeon and Anna teach me ~ we must wait with expectation, no matter how long it takes.  We must leave room for Him to fulfill things in His own way, in His own time.  So many of the men and women waiting on the Messiah did not understand that this baby born into a simple Jewish family was their Savior… because He did not look like the Messiah they had planned on receiving.  They had latched onto their own ideas and their own wisdom… and so they could not see what God was doing.  His ways and plans for us are different than ours (Isaiah 55:8) ~ higher, better, and beyond what we can imagine for ourselves.  We must wait, too, with obedience.  When the Spirit urged Simeon to go into the temple courts, he went.  He and Anna both were tuned into the voice of God and they could hear His next direction, their next steps.  Their hearts and their minds were set on Him.  Their lives were filled with worship, which reminds us of who He is ~ our great and faithful God, and who we are ~ His children, loved beyond measure.

So, yes ~ we are a people holding onto the promises of God, the hope of what is ahead.  May we be like Anna, ever offering our lives as worship and ready to speak of our redemption~hope to anyone who will listen.  May we be like Simeon, day by day waiting with a sparkle in our eyes and a steadfast assurance in our hearts ~ for all of God’s promises have been fulfilled in Christ with a resounding “Yes!”  ~ 2 Corinthians 1:20

Let us hold fast the confession of our hope without wavering, for He who promised is faithful.  ~ Hebrews 10:23

← Honoring Courage…
“I Dreamed a Dream of Time Gone By…” →

3 comments for “Waiting Here For You”