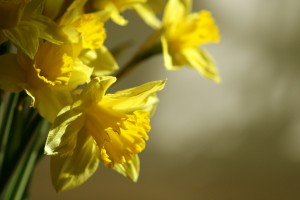 Now after the Sabbath, as it began to dawn toward the first day of the week, Mary Magdalene and the other Mary came to look at the grave.  And behold, a severe earthquake had occurred, for an angel of the Lord descended from heaven and came and rolled away the stone and sat upon it.  And his appearance was like lightning, and his clothing as white as snow.  The guards shook for fear of him and became like dead men.  The angel said to the women, “Do not be afraid; for I know that you are looking for Jesus who has been crucified.  He is not here, for He has risen, just as He said.  Come, see the place where He was lying.  Go quickly and tell His disciples that He has risen from the dead; and behold, He is going ahead of you into Galilee, there you will see Him; behold, I have told you.”

And they left the tomb quickly with fear and great joy and ran to report it to His disciples.  And behold, Jesus met them and greeted them.  And they came up and took hold of His feet and worshiped Him.  Then Jesus said to them, “Do not be afraid; go and take word to My brethren to leave for Galilee, and there they will see Me.”

Now while they were on their way, some of the guard came into the city and reported to the chief priests all that had happened.  And when they had assembled with the elders and consulted together, they gave a large sum of money to the soldiers, and said, “You are to say, ‘His disciples came by night and stole Him away while we were asleep.’   And if this should come to the governor’s ears, we will win him over and keep you out of trouble.”  And they took the money and did as they had been instructed; and this story was widely spread among the Jews, and is to this day.

But the eleven disciples proceeded to Galilee, to the mountain which Jesus had designated.  When they saw Him, they worshiped Him; but some were doubtful.  And Jesus came up and spoke to them, saying, “All authority has been given to Me in heaven and on earth.  Go therefore and make disciples of all the nations, baptizing them in the name of the Father and the Son and the Holy Spirit, teaching them to observe all that I commanded you; and lo, I am with you always, even to the end of the age.” 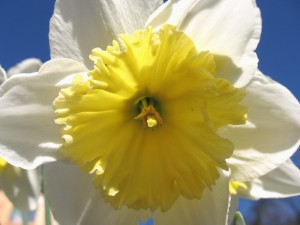 But on the first day of the week, at early dawn, they came to the tomb bringing the spices which they had prepared.  And they found the stone rolled away from the tomb, but when they entered, they did not find the body of the Lord Jesus.  While they were perplexed about this, behold, two men suddenly stood near them in dazzling clothing; and as the women were terrified and bowed their faces to the ground, the men said to them, “Why do you seek the living One among the dead? He is not here, but He has risen.  Remember how He spoke to you while He was still in Galilee, saying that the Son of Man must be delivered into the hands of sinful men, and be crucified, and the third day rise again.”  And they remembered His words, and returned from the tomb and reported all these things to the eleven and to all the rest.  Now they were Mary Magdalene and Joanna and Mary the mother of James; also the other women with them were telling these things to the apostles.  But these words appeared to them as nonsense, and they would not believe them.  But Peter got up and ran to the tomb; stooping and looking in, he saw the linen wrappings only; and he went away to his home, marveling at what had happened. 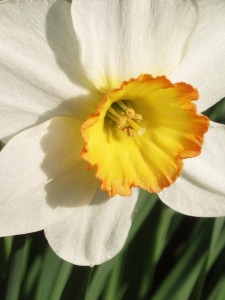 Now on the first day of the week Mary Magdalene came early to the tomb, while it was still dark, and saw the stone already taken away from the tomb.  So she ran and came to Simon Peter and to the other disciple whom Jesus loved, and said to them, “They have taken away the Lord out of the tomb, and we do not know where they have laid Him.”  So Peter and the other disciple went forth, and they were going to the tomb.  The two were running together; and the other disciple ran ahead faster than Peter and came to the tomb first; and stooping and looking in, he saw the linen wrappings lying there; but he did not go in.  And so Simon Peter also came, following him, and entered the tomb; and he saw the linen wrappings lying there, and the face-cloth which had been on His head, not lying with the linen wrappings, but rolled up in a place by itself.  So the other disciple who had first come to the tomb then also entered, and he saw and believed.  For as yet they did not understand the Scripture, that He must rise again from the dead.  So the disciples went away again to their own homes.

But Mary was standing outside the tomb weeping; and so, as she wept, she stooped and looked into the tomb; and she saw two angels in white sitting, one at the head and one at the feet, where the body of Jesus had been lying.  And they said to her, “Woman, why are you weeping?”  She said to them, “Because they have taken away my Lord, and I do not know where they have laid Him.”  When she had said this, she turned around and saw Jesus standing there, and did not know that it was Jesus.  Jesus said to her, “Woman, why are you weeping?  Whom are you seeking?”  Supposing Him to be the gardener, she said to Him, “Sir, if you have carried Him away, tell me where you have laid Him, and I will take Him away.” Jesus said to her, “Mary!” She turned and said to Him in Hebrew, “Rabboni!” (which means, Teacher).  Jesus said to her, “Stop clinging to Me, for I have not yet ascended to the Father; but go to My brethren and say to them, ‘I ascend to My Father and your Father, and My God and your God.’”  Mary Magdalene came, announcing to the disciples, “I have seen the Lord,” and that He had said these things to her.

← Questions ~ Meaning of the Cross
The Road to Emmaus →