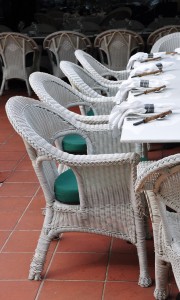 So… It was the summer of 1992.  A very “cool” group of people invited me out for lunch one afternoon.  I was so surprised and excited to be included, they were the well-to-do, hip, young crowd that everyone wanted to hang with  ~the “life of the party” types.

Until recently, I was broke and had been working two and three jobs to try to get by.  For the last few years, I had no time to go out with friends and even if I had, I hadn’t been able to afford any “extras.”  I had landed a new job at a retail warehouse, and was finally making some decent money.  Anyway, I had just spoiled myself a bit and splurged at a sale on a couple new items of clothes, undies, shoes, this and that, and a darling little sun dress that I was dying to wear somewhere ~ this lunch out would be PERFECT!

I got showered, did my hair up BIG (that 80’s look was still hanging on in my town), took extra time on my make-up, painted my toe nails, and got dressed. The dress looked great, it was a pretty shade of green with little flowers on it.  I loved the straps, they criss-crossed in the back.  The skirt wasn’t too short, but shorter than most things I ever wore, a couple inches above my knees.  It was made out of a rayon sort-of fabric, so it was kinda light and airy.  Since I had more time off lately, I had a great tan that year and made sure to shave and lube up my legs with some lotion.  I finished my look off with a new little (a relative term when you wear a size 10) pair of flat, strappy sandals, and was VERY pleased with myself.  I hopped in my car and headed for the restaurant, music blaring and singing along.

I arrived with perfect timing.  The group was just heading in the door as I pulled up.  I wasn’t too early, looking too eager to hang out with my new “friends,” and I wasn’t too late, looking like I was trying too hard to get ready. I headed in, and they all greeted me just inside the front door.  The girls were more lukewarm ~ you know how girls can be.  They were checking me out, making sure I was worth the effort and worthy of their popularity.  I figured I had some work to do over lunch to win their favor, how hard could it be?  The group decided to eat out on the patio because it was such a beautiful day and there was just one table left.  I was agreeable to anything, just wanting to fit in. We weaved our way out to the table through the crowd of lunch-goers.  I was really enjoying the moment, I could hardly stand it!

Lunch was good, but I hardly ate a thing compared to my usual stuffing sessions.  As broke as I had been since leaving home at 17, I had learned to eat whatever landed in front on me, no matter how much or how little…  A girl had to be practical, and at nearly six feet tall, I had trouble keeping weight on my long frame.  I didn’t want to look like a pig, and tried to keep my mouth free of food in case I had an opportunity to add something fabulous to the conversation.  Amid all that was going on, I kept noticing that the light wind crossing the deck was pushing my skirt up, so I kept one hand in my lap in order to maintain my modesty.  The girls seemed to warm up to me a bit, asking me questions about myself.  I was totally wrapped up in how perfect they were, and tried hard not to stare.  Their make-up was flawless, hair lovely even with a light wind at their backs, tans to die for, and outfits that must have cost more than I made in two weeks.  We were all in our early 20’s and I kept wondering how they could afford all that.

We finished our lunches, well, sort of.  The girls had 2/3’s of a plate left over each… me included.  I was STARVING still, and wished that taking the rest with me was not uncool, but it appeared that it would be and so I left it behind.  I stood up from my chair and began my walk across the patio.  I was first because of where my chair sat, so I did my very best to look fabulous from the rear as I went, my new entourage behind me.  When I was about 15 feet from the restaurant door, I felt my cute “little” sandal catch in a crack of the cement patio.  You know, one of those purposely placed spacer cracks, so that the cement won’t crack on its own in the cold weather.  Anyway, the toe of my sole caught and caught hard.  I had been walking rather quickly, because I felt so self-conscious, and so the sticking of my sandal caused me to launch forward onto my other foot.

Momentarily, I was caught in a lunge position, like you do in exercise class to tighten your buns.  I simultaneously jerked the foot that was stuck, which actually freed my sandal, but also catapulted me forward like Superman on his way to save the day.  I was literally airborne with both arms extended out before me and with tanned, slicked up legs out behind.  It seemed like my flight lasted an eternity, when I noticed a beautiful an enormous pot of flowers in front of me… Funny, in my excitement earlier, I hadn’t noticed the 3 foot cement pot just outside the door, filled with an array of cascading flowers and vines.  Lovely.  My hands hit the side of the pot and sent it over on its side with a loud thud.  It cracked in two and flower buds and potting soil went everywhere.  I was so mortified that I had ruined the arrangement, I hadn’t even noticed my own landing.  There I lay, flat out, on the concrete.  I began to think through all my body parts, trying to tell if any were hurt.

As I lay there, I again became aware of that lovely breeze that had been going over the deck… why could I feel it over my behind? It was then that I realized my sweet little skirt was up over my back and my rear was visible to all who wanted a peek.  Thank goodness I wore my new panties!  I quickly rolled over and looked up to see everyone on the deck staring at me in disbelief.  One of the young men who was with our group walked up and extended a hand saying loudly, “How many beers did you drink?”  Humiliation. “Just one.”  I muttered. Actually, I had barely sipped the one I was poured, I didn’t like it, but wanting to fit in, I didn’t refuse it trying hard not to be rude.

As he pulled me up, I noticed the entire restaurant patronage inside was standing at the windows sizing up the scene I had made.  The group that I had come with tried hard to pretend that they didn’t know me.  A girl at another table was laughing in hysterics, while a couple others were madly trying to get her to stop.  A busboy was already trying to undo the flower disaster I had caused.  I had to walk the rest of the way to the door, step over the flower mess, and go through the entire length of the restaurant dining room before I could reach the bill counter and the way out .  As I walked I felt a warm trickle, and looked to see two skinned knees bleeding down my shins, messing up my pretty tan and excellent shave job.

I sat on the bench just near the entrance to the restaurant.  A nice looking man, maybe in his mid 40’s came up and knelt in front of me with paper napkins he had wet in the drinking fountain.  As he put the napkins on my stinging knees he said, “My daughter is the one who was laughing at you out there.  That was wrong of her and I am so embarrassed.  I am so sorry.”  I thanked him and he went back to the patio and his lunch.  I realized my new “friends” had already deserted me and left the restaurant.

I paid my bill and as I came out the door to my car, I saw the young man that had helped me up, standing in the parking lot near his car.  He laughed and said, “Nice one!”  I got in my car, radio off, and headed home.  Needless to say, I was never invited along to anything with that group again.  I learned so much that day.  It was a new beginning for me, in a way, deciding to no longer worry so much about what other people think of me.  It was a realization that “cool” does not necessarily mean “kind,” “friendship” or “selfless.”  Soon after, I was grateful for the experience.  I didn’t have that sting of embarrassment in my stomach, whenever the event came to mind.  I knew I didn’t need people like that, and was glad to have learned it, even at my own expense.  It still is one of the most embarrassing moments of my life, but I can laugh at myself now.  The whole thing grew me up a little bit.

As for the dress, well, that was the first and last time I ever wore it.  My fall had skinned little holes in the bust and skirt.  I hung on to it for years though, and whenever I would see it at the back of my closet, I would giggle at the reminder of a good lesson learned.

Proverbs 16:18 Pride goes before destruction, a haughty spirit before a fall.

← Walking With God: A Confession
A Day in the 23rd Psalm →