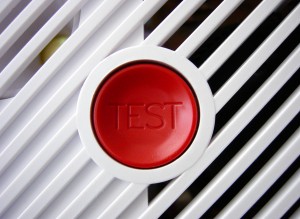 I’ve set two fires in my kitchen in recent months.  First, I put a potato on a paper towel in the microwave and let it go for about twelve minutes.  I noticed an odd color flaring up behind the microwave door, opened it out of curiosity, and… fire!  My reaction?  Laughter.  And I just stood there, thinking: wait.  I’m not supposed to be laughing right now.  I’m supposed to do something.  Do something!  So then I grabbed a towel and fearfully swiped at it until it was out.  The second fire was a few nights ago.  Earlier in the day, I’d cooked a pizza in the oven and dropped an oven mitt in the oven as I was reaching for the food… I  thought I’d grab it after the oven cooled off.  Of course, I forgot.  And went on to pre-heat the oven for Neil’s dinner.  Again, I noticed crazy color leaping behind the glass.  Again, I opened a door to see flames.  This time, the fire was bigger and I yelled for Neil.  Fortunately, he was home… because my reaction (again — standing there shocked) wasn’t putting the fire out.

Lesson one? Stay out of the kitchen.
Lesson two? I’m not great in an emergency.
Lesson three? I’m really scared of fire!  I already was somewhat aware of this… I  don’t like holding sparklers on the 4th of July and I don’t have the nerve to light a match.  I’m a big fan of those lighters that are really long so that the flame is far away from my hand.  I love candles, but I’ve never had the urge to quickly swoop my finger through the flame (Neil does this all the time and it freaks me out).  Fire is dangerous when it gets out of control, and I’m (apparently) not so great at getting it under control.

Maybe all of this is why it really caught my attention when I read, “Above all, taking the shield of faith, wherewith you shall be able to quench all the fiery darts of the wicked.”  Um, fiery darts?  I don’t want any of those aimed at me, thank you very much.  A little more research confirmed this reaction.  As it turns out, the enemies of the Romans used combustible arrowheads that would set fire to ships, fortifications… even shields.  The Romans would use metal to cover their shields so that they wouldn’t catch on fire.  Instead, the shield would put the fire out.  It would stop the destruction before it had a chance to start.

Make no mistake about it — we’re targets.  The arrows coming at us, loaded with  destruction, are temptations and troubles aiming to overcome us.  I want my shield of faith, please!  I want to protect myself — I want to defeat the enemy’s plans to harm me… and when I surround myself with the expectant hope and knowledge of who God is, walking in His Word, letting Him go before me… the arrows are stopped mid-air, falling uselessly to the ground.

I love these verses: Dread not, neither be afraid of them. The Lord your God which goes before you, He shall fight for you, according to all that He did for you in Egypt before your eyes. (Deut. 1:29 &30)

The other tidbit I found when studying the shield is that Romans used to soak their shields in water, to further debilitate the flaming arrows… and we can do the same, preparing our shield (our faith!) by soaking up the Living Water… the presence and the Word of God.  Your greatest defense is being covered by your faith (active, knowing, expectant faith!).  Because guess what?  Your faith is in an awesome God who is greater than any force in the world and any weapon they might use against you.

Have you made time to “soak in” the presence of God today?

← The Beauty of Color
My Everything →