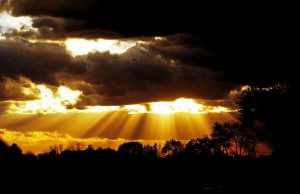 One of the most difficult things for me in the many years I have been a believer has been the occasional and seemingly random disappearance of God.  He becomes hidden, and I find I must take each step in faith, believing Him to be there, even if I don’t really sense Him.  There have been times when I have really wanted to feel His presence and be reassured that I was doing His will and not my own – yet my prayers for wisdom seemed to be unheard, and I was forced to fall back again on my faith in His promise that He will never leave or forsake me.  I had to try to see things through His eyes, and act on what I thought would glorify Him.  I read and re-read the Psalms in which David would cry out to the Lord not to hide His face from him; praying that He would not keep silent.  It reassured me to know that I was not alone in my perception of God’s intermittent silences.  This occasional hiddenness seems to be a part of the way He sometimes deals with us, and while I don’t understand it, I must accept it as a reality, and come to peace with it.

He may feel that in keeping Himself hidden, I will be forced to act on the strength of what I have learned of Him in the past – a kind of test of my maturity; or He may be hiding Himself for some purpose of His own which I do not need to know.  This is where I am called to trust in His wisdom and love for me.  I continue to pray on the unshakable belief that He is there, even if He may be hidden for the moment.

I have come to realize that some things about God will always be a mystery to us, perhaps even after we are in eternity.  When He hides Himself, I know He has not really been “gone”, but I feel so much better when I have some perceivable assurance of His being there.  I see this as an indicator of the weakness of my faith.  If I were a stronger Christian, perhaps I would not need such assurances… my faith would always be able to sustain my belief in His presence, and I would never question or feel insecure.  Then again, I know that God knows my frame, and that He knows ahead of time that I am not perfect, but still loves me.  That is all a part of His grace.  The Christian walk is an ongoing process, and I will have my failures as well as my successes, and God knows this, and I know it.  He forgives me and provides the will to continue on; to run the race; to press on toward “the calling to which I have been called” (Eph.4:1).

Sometimes when He seems hidden I know it is because I have chosen to walk away from Him.  In those cases, I am the one who has disappeared, not He.  I have known that He wanted some part of me to be released to Him, and I have been holding on with both hands to whatever it is, and refusing to let go.  It isn’t until I can finally trust Him enough to let go of my self-determination, my self-love or pride, and acknowledge His greater wisdom and deeper understanding that He lets me see Him again and continue our dialogue.  At other times, however, He just mysteriously vanishes, and I am left to fall back in trust on my belief that He is there, whether discernible or not.  Because I know He is omnipresent, I should have no fear that somehow He is genuinely missing… it is just that He stays silent when I am longing to hear His voice.

Many of us have heard the saying that if God is not there, guess who moved!  Yet, in the case of Job, for example, it was God Who stayed hidden as Job wrestled with his questions and pleas of “Why”, until God chose to answer him… and even then He did not fully answer, but essentially told Job that He was not accountable to His creatures.  God does not really owe us any explanations – and I believe He is so far beyond our understanding that we may never know all of Him.  That is why He has given us Someone to Whom we can look and understand all we need to know of God.  He has come to us Himself, in Christ, and we are told if we know Christ, we also know the Father.  To see the Father, we really don’t need to know more than Christ and God’s Word.  In these two things we know all of God He feels it necessary for us to know.  That is why a strong knowledge of the scriptures is so essential.

From our human standpoint, it is sometimes hard to hold on, to keep the faith when God hides Himself.  It helps to remember that even Jesus experienced the hiddenness of the Father.  Although He was fully God and fully man, He had lived His entire life as a man walking in God’s presence and being completely obedient to the Father’s every direction.  Yet, as He hung on the Cross during those terrible three hours of suffering and as He took upon Himself all the punishment for my sin and yours, Jesus cried out to God, “Father, Why have You forsaken Me?”  He was disconnected from the Father for the first time.  This hiddenness of the Father was essential, because as the sin-bearer, Jesus must be completely separated from the Father, just as we would have been if not for His sacrifice.  This means that in looking to Jesus, we know we can find a comforting friend Who has been tested as we have, in ALL things.  Even the Christ experienced the Father’s hiddenness, and this means He will understand our confusion and anxiety when it happens to us.  Somehow that comforts me.

When God seems to disappear, I can know that it is not always because I have been the one to move or turn my back.  Sometimes, for His own reasons, He just stays silent.  I do not need to know why.  I do not need to have Him explain Himself to me.  I can trust, because He has told me to trust, told me that He is never far away, and that He will never truly abandon me.  Job’s response to his suffering was to say, “Yea, though He slay me, yet will I trust in Him!”  My prayer is that I will continue to have this kind of faith; that I will not be the kind of believer who must walk by sight, and not by faith.  I don’t want to be like Thomas, who needed to see the nail prints in the Savior’s hands, but I want rather to trust in the Word of God which tells me, “Who shall separate me from the love of Christ?  Shall trouble or hardship or persecution or famine or nakedness or danger or sword? As it is written, ‘For your sake we face death all day long; we are considered as sheep to be slaughtered.’ No, in all these things we are more than conquerors through Him Who loved us. For I am convinced that neither death nor life, neither angels nor demons, neither the present nor the future, nor any powers, neither height nor depth, nor anything else in all creation, will be able to separate us from the love of God that is in Christ Jesus our Lord.” (Romans 8: 35-39).

He may be hidden for a time, but He is there… and He loves me.

← Ruth: From Beggar to Princess, part 7
Happy Thanksgiving Day to our Canadian Sisters! →

3 comments for “Walking With God: A Hidden God”