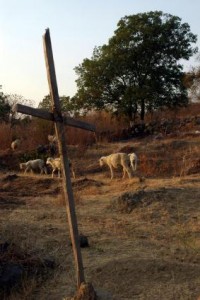 Easter is almost on us again, and we are being bombarded with various visions of bunnies and chicks, colored eggs, Easter candy, and new clothes. Easter, for the world, has become a combination of children’s holiday and a modern version of Spring Solstice. None of it has much to do with the death and resurrection of the Lord. Somehow, even in Christian circles, these things have become linked in our minds, and as time goes on, we see less and less of the religious remembrance and more and more of the secular.

In reading the Gospel of John recently, I thrilled at John the Baptist’s declaration as he sees Jesus coming toward him. “Behold, the Lamb of God Who takes away the sin of the world.” I found it appropriate to see that it was Jesus coming toward John; it seems He is always the One Who approaches us first. John the Baptist was a Jew; he knew the significance of that name, “Lamb of God”

God had chosen the people of Israel to be His people, and from the beginning, it had been a difficult relationship. Over and over they had been blessed by Him, and had prospered under His blessing, and yet over and over again they would drift away from their faith in Him to go their own way. He called them a stiff-necked people, and had tried various ways to help them find a way to live with Him in intimacy.

In the first garden, He gave man one single rule which he needed to obey. Man chose to disobey even that one rule, and went His own way. Adam and Eve disobeyed God, and had to be disciplined. However, in His grace, although He turned Adam and Eve out of the garden, He clothed them in skins, and they did not die physically, only spiritually. Holiness was balanced by grace. The blood sacrifice for sin was made by God through the killing of the animals to obtain the skins which now clothed Adam and Eve, but the intimacy which He had with Adam in the garden was broken. Nevertheless, He allowed man another chance.

Then, God allowed man to govern himself by his own conscience, and man got so far off track that God chose to wipe out all of mankind by the flood, only, once again in His grace, saving one good man and his family. Our consciences were not enough to keep us from sin.

Next, He let His people govern themselves through a series of rulers and judges. The people eventually refused to live under their rule, and the scripture tells us that at the end of that period “every man did that which was right in his own eyes”, and that the world was in a terrible state. Once again, man chose to abandon God and go his own way, and made a botch of it. Political governance didn’t seem to keep the people faithful.

Then God let His people live under the tenets of family rule, and the people of Israel lived according to the dictates of the patriarchs, but that didn’t work either. The people abandoned God and went their own way, and so finally the Lord God sent the Law to let the people know very specifically what He expected of them. Even during the time when Moses was up on the mountain getting the Law, the people were at the foot of the mountain worshiping the idol of the golden calf. Moses brought the Law to the people, and the Law became the ruler by which all men were to measure their lives. The Law showed us that no man is able to meet God’s holy standards, and it became evident that man, on His own, was hopeless.

Under the Law, the people would come back to God and then fall away, again and again. God then sent the prophets whose purpose was to warn the people to repent; to turn away from their sin and return to God and walk with Him. The people would respond for a while, but would eventually drift back to their old ways. God had given man every chance, but they continued to be rebellious and stiff necked. He longed to restore the intimacy with them which He had with Adam before the fall, but their sin had broken the line of communication. God is a holy God, and He cannot be in the presence of those for whom the price of sin has not been paid, or is unforgiven.

God had known from the beginning that man would never stay faithful, and knew He had to provide another way. All through the generations He told His people to expect One who would come, meaning that this sent One would restore fellowship between God and man. The Jewish nation thought Messiah was to be a world leader, a political figure who would lead Israel to its proper place in the world, as God’s chosen people, but God had a wider meaning, a spiritual meaning. God, in His incomparable love and grace, came Himself in the Person of Jesus Christ to become the spotless sacrificial lamb, Who, by the shedding of His blood, would finally obliterate the need for all the sacrifices of bulls and goats and lambs. He would die as the final sacrifice, the final propitiation for the sin of mankind.

This blood, shed for the protection of the faithful, was foretold by the blood sprinkled on the doorframes of the houses on the day of Passover, protecting the children of the faithful from the angel of death. It was foretold again in the picture of Abraham presenting his son, Isaac, as the sacrificial lamb, and in many other types and shadows in the Old Testament. The prophet Isaiah speaks of the One to come most movingly in Chapter 53 of his prophecies. God Himself, in the form of a Man, would become the blood sacrifice needed to bridge the gap between God and man so that fellowship could be restored, so that God’s anger against sin would pass over those who trusted in the shed blood of God’s own Lamb.

Christ was that spotless Lamb Whose blood was shed, but who, even more amazingly, rose from the dead to demonstrate eternal life, and Who sits now at God’s right hand, until He comes back for His bride, the Church. God’s gift of grace and mercy is free to all who will believe and accept Jesus as the Christ. God, in His mercy, has extended His invitation to those outside the people of Israel, and we can become “adopted” sons and daughters. We who have heard this wonderful Good News and received it are the most blessed of people, because we know without doubt that we will spend eternity in the Presence of God; not because of anything we have done, but because of all He has done.

We can never understand completely all that Christ suffered; not just His physical wounds, but what He suffered in taking upon Himself the sin of the world, and experiencing, for us, the separation from God that should have been our just reward. His cry, “Father, Why have You forsaken Me? “is unbearably moving when we remember that He had never lived without God’s presence before. Now, at the most extreme and terrible moment of His life, He is alone. At that moment, He was becoming sin for us. It was the reason He had come to earth. Before the foundations of the world, God had this in mind. When Mary gave birth to the Christ Child and laid Him in the manger, God looked down on that stable, but He saw the shadow of the cross over it. We put so much emphasis on the birth of the Baby, but the reason He was born was for this moment. However, we must not stop at His death.

The amazing thing, the real reason we can look forward to eternal life is that He rose from the dead. If Christ did not rise, then we have no hope of rising, either. If death was the end for Him, then it will be the end for us. It is only because He rose again that we can claim to have the hope of resurrection ourselves, and that is why the enemy wants so much to have the idea of bodily resurrection seen by the world as ridiculous superstition. However, Romans 6:8-11 tells us: “Now if we died with Christ, we believe that we shall also live with Him; for we know that since Christ was raised form the dead, he cannot die again; death no longer has mastery over Him. The death He died, He died to sin once and for all, but the life He lives, He lives to God. In the same way, count yourselves dead to sin, but alive to God in Christ Jesus.”

Dear sisters in Christ, let us be happy together! Christ is risen! He is risen indeed! Happy Easter.

————————————
About Barbara
I am a 77 year old who has been a believer for over 60 years. I have been writing fairly intensely for the past six years.  I wanted to discover, with God, the answers to many questions: solitude vs. loneliness; how to be old in a world driven by activism; how to be content in whatever circumstances the Lord allows, and so on.  I have found the bottom line of all my inquiries is the same: trust God, and obey what you understand of His will. Through submission to His Word and His will, growth and understanding and peace will happen. It is my hope that sharing what I have found will encourage others in their own personal searches.

← The Longings of My Heart
Who is this? Hosanna in the Highest! →

3 comments for “The Lamb of God”