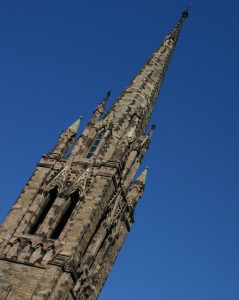 I have just come away from reading a discussion on the Kindle e-book page which has disturbed me.  Apparently some e-readers resent the fact that there is no way on Kindle’s present listing of available books to determine whether or not a fictional book contains Christian based material.  They feel they risk being force-fed Christian beliefs when they are not interested, and the original idea was to ask the Kindle folks to devise a better screening system so that they may be “warned” that a book contains Christian material.

I can understand their position, I guess.  I wouldn’t mind a way to determine ahead of time if a book proposes ideas which I find offensive such as gross immorality or Satanism or the propagation of anti-Christian ideas.  I don’t enjoy books which are full of filthy language or acts of lust.   A better system of classification might be helpful in both directions.  In the cause of better information, I didn’t think it was a bad idea to develop a classification of Christian based fiction which might be useful to those who preferred it as well as those who wanted to avoid it.

What was distressing to me was the discussion which followed, which was so full of vitriolic hateful language toward Christians.  It was painful to read.  How is it that the message of the One Whom we serve ~ which is about forgiveness, love and grace ~ should be so misunderstood and resented by the world?

It would be easy just to say that people just don’t like to be told that they must admit that they have chosen to go their own way and have ignored God.  Of course that is true; it has always been true and always will be true.  People resent having to face the fact that in God’s eyes they have sinned.  Sin is not a word you hear very often anymore, even in the Church.  However, many of the posts seemed to me to be saying something else.  Their anger didn’t seem to be directed as much toward Christ, as it was toward those who bring His message.  It was even mentioned that nowhere in the world other than the U.S. is the Christian message presented in such a self-righteous and smug way.  I am afraid I share some of those feelings.  I have Christian friends in many places, but there is very little of the extremism in other countries which is to be found here.  There is something distinctive about some of the patterns in the U.S. Christian Church which I find uncomfortable.  Somewhere along the line we have lost the idea of the Church as the Body of Christ, His arms and legs in the world, and a place for corporate worship and fellowship.  Instead, it has become a distinct culture which has some unpleasant attributes.

This is not a brand new thing, but something which I have seen develop in the course of my lifetime.  Better minds than mine have written about it and there are many excellent books which attempt to call the Church back to wellness and away from the secularism, materialism, and scriptural illiteracy which are now so evident within the U.S. Church.  We have become mired down in the theology of entertainment, pop psychology, and trying to fit in with the world rather than being set apart to holiness, self-sacrifice and humble servanthood.  Not all Christians are going to agree with me in my perception because they haven’t known anything else.  I am not educated enough to point out the history of how this has happened, or the whys, or the theological error of our present state.  However, I can give an opinion as to how those of us who see the dangers and want to help might proceed.

We might want to consider whether or not we have intermingled our politics and our theology so closely that our politics have become our theology.  Christ said to render to Caesar those things which are Caesar’s and to God those things which are God’s.  While our faith should help us in determining how we vote, our politics should not be seen as a test of our faith, or any indicator of the depth of our commitment to Christ.  Our self-righteous insistence on the moral imperative of ultra right politics is no indicator of our understanding of the gospel of Grace.  A theocracy will never work unless and until (and the time is coming) God Himself will be the Ruler.  While we want to try to imprint society with moral choices, we cannot force morality from the outside.  Prohibition tried to do this, and was a complete failure.  Morality can only come from within, and our strongest efforts should be in telling others about the grace of God in sending His Son to bring reconciliation with God so that people can be transformed.   We need to treat the primary disease, not just the symptoms.

We shouldn’t be trying so hard to convince the world that the Church is “cool” and “with it”.  I see singers dressing like pop icons (so many unfortunate Elvis wannabes), or leading worship in clothes totally inappropriate for the Church (a skin-tight faux snakeskin jumpsuit was one thing I observed).  Women with more makeup than Tammy-Faye, and clanking around with more jewelry than the girls on Jersylicious.  Preachers trying to use slang more than twenty years out of date.  Youth pastors leading their charges in games which are vulgar and not very well thought out as a means of teaching Christ or bonding teens in Christian fellowship.  We have fallen into the notion that we must entertain, because we apparently think the reality of the Christian message is not strong enough or compelling enough in itself to draw people to Christ.  That is denying the power of the Holy Spirit, Who draws us to God.  We need to recognize that it is all in God’s hands, and let Him do His work while we do ours…  Which is to get back to the essentials: to know God and to bear witness to Him through the demonstration of the fruit of the Spirit, and an attitude of servanthood.

Most of all, we need to be actively pursuing Christ in our own lives, and studying the Word diligently so that we can give a reason for our faith.  Instead of trying to tell everyone else in the world how to live their lives, we need to focus on making sure we are valid witnesses to the faithfulness and mercy of God in our own lives.  If we are demonstrating humility and kindness and gentleness and patience, there should be no reason for the world to see us as self-righteous and smug.

We who know that we are sinners, redeemed by the blood of Christ and God’s grace and not by our own righteousness, have no cause to go around pointing fingers at others and implying that now we are saved we are better than they, and that we are morally superior.  Of all people, we should know how vast is the distance between our own lives and that of the perfection of Christ.  We can’t insist that others who don’t know Christ live in a way that even those of us who do know Him are unable to maintain fully.  Peter pointed out this principle to those who wanted to make the new Gentile Christians take on the burden of the Law (Acts 15:10)  Our primary focus should be on studying to show ourselves approved of God, and being set apart to humble lives of holiness and grace than in trying to walk with one foot in the world and one in the Church. This is not the same as being clannish and exclusive in our relationships and keeping out all those who don’t conform to our own set of rules.

I hope and pray that Christ will come soon, but until then we will need to be prepared to see increasing hostility toward God and those who call themselves Christians.  Let’s not make it even harder on ourselves by being untrustworthy witnesses to the glory and goodness of God in sending His Son to reconcile us to Himself.  Let us humble ourselves, and direct our energies toward becoming conformed to the spirit of Christ, and let Him be our ruler and guide instead of our own egos and needs.  This is my prayer for myself, and also for the Church.

← Honoring Veterans for their Service!
Reflections of His Beauty →