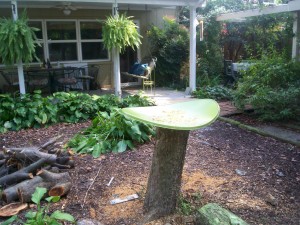 "My Crabapple, still feeding the birds!"

I had the strangest experience the other day.  The memory is still quite vivid, and I am reflecting on the excitement that was taking place in the dying crabapple tree.  It is the tree that adds dense shade to the back porch, and my swing.  It is dying due to the torture it suffered in the last several years.  First from our very eerie August Kentucky hurricane, the one that landed in Florida then bounced around the southeast, with its tail ending up in the Ohio River Valley.  An unusual amount of its tree victims landed in our back yard.  So, my tree was injured by many limbs from my neighbor’s trees and from the wind itself.  Our yard was on many a sightseers list; it looked unreal.  My pretty little tree struggled on valiantly through the rest of the year until January.

In January, we had another freak storm, this time an ice tempest.  It rained ice all night, and the felled trees sounded as though we lived in a war zone.  Again, my yard was full of trees, and again, the onlookers and photographers were steady company for a while.  I don’t know why my yard was so blessed, twice!

That spring my crabapple tree struggled, but it lived.  The next summer it flourished; this year it began losing its leaves, as soon as they budded, although later it was covered in fruit.  Removing a tree, a living thing that has given shelter to people, birds, and animals alike is always a sad thing.  It was to be cut down in a couple of days, but not until after the most unusual infestation of birds I had ever seen.  It was as if they knew their world was forever changing.

I thought the several goldfinches “peek-a-booing” in the branches were rejoicing over the freshly filled feeder, and I wondered why there were in town at this time.  The farm fields usually hold them enthralled them until later in the fall.  I had been on the porch for a while studying my Bible, and having my devotional quiet time.  All at once an unfamiliar semi-melodic sound caught my attention.  I finished my last amen, and began to stare at the prematurely golden hued leaves. The skinny bare interior limbs were easily seen.  I was pleasured by an ever-growing flock of goldfinch; the females were already turning a beautiful olive shade, even though the perky males were still flashing a brilliant yellow.  Now I was curious.  They were making a guttural chirping sound, rather than their common peeping notes that end on an upswing.

My hummingbirds were feisty too.  They buzzed around my head in their ongoing territorial flights, checking their yard, chasing the sneaky ones out. There were so many, I decided that I would come out later in a red shirt to draw them even nearer.  I like it when they look at me with eye-ball to eye-ball then hum around my ears.

I became mesmerized by my tree, there was a bird fair was being held in it.  A small Thrasher appeared.  I haven’t seen one all summer.  A “yackety-yack” Blue Jay was bossing the attendees as a humorous juvenile Kentucky Cardinal came by awkwardly strutting his stuff.  My tree was alive again, teeming with feathers flying all around.

In the midst of all of this flying chaos happening within just a few feet from my nose, I was taken in my thoughts to another era, a time when my life was tinted in a dark manner.  I spent many disquieting days staring out the back windows overlooking the porch where I now sit.  In those days, I prayed for a sign, for something to lift me out of myself, something to prove God cared.  I needed a spiritual touch in a physical way, and He provided.  Through His nature, the beautiful birds, He touched and warmed my heart and the shell in which I was hiding began to thaw.

One such time I saw my first Flicker, in the yard by the fence was an enormous bird with startling spots.  He wore a red kerchief glowing on the back of his neck, and a showy black bib on his chest.  What a jolt ~ a “great speckled bird” indeed! I began to pay attention each day to the new and different birds visiting my backyard.  I thought of them as my “Flying Praises.”  I kept a record in my “bird” book of the dates when new bird visited my yard.  Were the skies becoming a little brighter, the days a little lighter?  Over time, God used His creatures as blessings for me.  Now I see the beauty in their flight as reminders of His promises to be with me always, and of His love for me.

Now, let’s return to the day before yesterday.  My husband arrived home, and I called for him to hurry, and share this intriguing sight with me.  We watched in amazement.  What had drawn them here all at once?  So many birds of various varieties were landing in such a small tree.  He watched with me in bewildered enchantment for a while.

Soon, after my husband re-entered the house, there was a clamorous commotion, a loud rushing and crash-bang, as flapping wide wings landed for a moment in the tree.  Paradise was disrupted!  A huge hawk, looking for a tasty morsel, was scaring my fragile birds.  He quickly flopped from the Crabapple into the Pyracantha.  The tops of the tree and bush limbs are intricately intertwined, so much so, that the brilliant orange berries appeared to be the autumn fruit of both.  I clapped my hands in shock, and I yelled!  My clamoring along with the thorns on the bush caused him to make a hasty exit.  He tore his way through the closely woven branches, and he was quickly out of sight.  I’m not at all certain if he captured his meal, or not!

Now what was I to make of this?  I had been reveling in a wonderful time of worship.  Having a beautiful time of praising God for the blessing of His nature and suddenly there were death, disturbance, and destruction.  Wow! What a mood changing experience.  What was this?  Life being life, cycles being cycles, nature in action, or the food chain in Technicolor?  It was all of that, and it exhibited a living lesson for me. T he birds had been aware trouble was brewing, in their own way they were in hiding in the shelter of a doomed tree.  Even when exalting in the joy of God’s blessings, I should not get so caught up in the beauty of life that I would be lulled into an unawareness of the world around me, giving the “destroyer” the opportunity to slip in and disperse my peace and bring chaos into my life.

In scripture, reading from the Contemporary English Version we are warned… 1 Peter 5:8 “Be on your guard and stay awake.  Your enemy, the devil, is like a roaring lion, sneaking around to find someone to attack.”

And again… 1 Peter 5: 10b  “You will suffer for awhile, but God will make you complete, steady, strong, and firm.  God will be in control forever!  Amen.”

My faithful birds soon returned singing their little hearts out.  The concert continued and so did my joy, and I welcomed anew the truths learned in His “heaven to earth” touch!